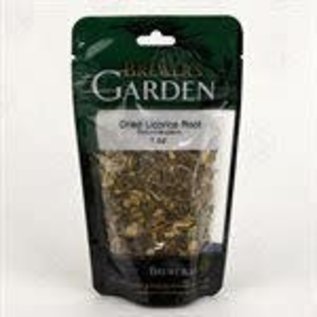 Licorice root has a sharp flavor that is similar to anise, but is sweet with bitter notes at the same time. The roots themselves have a reddish brown exterior and yellowish interior, they look much like any other wooded stick that is about the thickness of a pinky, but the wood is soft enough to be chewed. Licorice root is also simply known as licorice, sweet licorice, liquorice, sweet wood, brewers licorice and licorice stick.

Licorice root is most often added during the wort boiling of darker style beers such as porters, stouts and dark ales. Whole pieces of Licorice root are often crushed or shredded before being added to the wort at the beginning of the boiling process. Dark, strong flavored beer usually call for one to two ounces (28-56 grams) of Licorice root per five gallon (3.8 Liters) batch of beer. In lighter beers, such as a pilsner, add about 1/2 ounce in the same size batch of beer. Keep in mind when adding licorice root to your brew that the shredded root will give you more of its flavor faster than whole or crushed pieces.