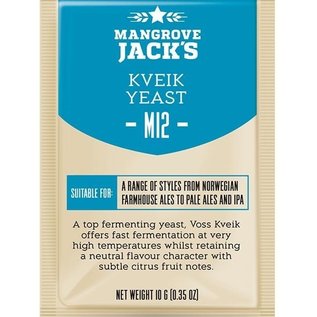 Traditionally used to brew local farmhouse style ales in Norway, they are a relatively new phenomenon on the world brewing stage. There is actually more than one type of Kveik yeast, and each is traditionally a blend of more than one strain.

M12 Kveik Yeast is a single culture yeast that uses an isolate of the most important single strain in the naturally mixed culture 'Voss' Kveik blend. This member of Kveik family of yeast is so called because it originates from Voss in Norway, where the culture has been carefully maintained by Sigmund Gjernes since the 1980s.

Each Kveik yeast has its own specific profile, but they are all known for their ability to ferment across a wide temperature range, include temperatures as high as 40°C (104°F)! Furthermore, unlike most familiar farmhouse style yeasts, which are often phenolic - Kveik ferments with an exceptionally clean taste profile, with just a delicate hint of fruity esters.

These qualities, along with their interesting backstory, have meant Kveik yeasts have become the exciting new trend in the craft brewing world, especially for brewing IPAs - the Voss Kveik being perfect for American style IPAs on account of its restrained orange-citrus flavour profile.

However, their use is potentially even more exciting for the home user, especially those in warmer climes, due to the reduced reliance on cool ambient fermentation temperatures.