Aframomun melegueta Also called "Grains of paradise", "Guinea grains" and "Melegueta pepper", these small seeds look like cardamom but have a character all their own. 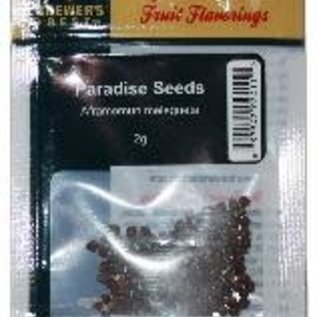 Paradise Seed is appreciated for its unique spicy-hot flavor with subtle notes of ginger.
Add 1 to 8 grams or about 1/4 teaspoons to 1 tablespoon of Paradise Seed to a 5 gallon batch of wort. The seeds should be crushed in a mortar and pestle, or between two other hard surfaces, before being added to the wort toward the end of the brewing process to retain Paradise Seed's Aroma.

The spice is native to West Africa & during medieval times was used to flavor food. It has also been used as a pepper substitute. While it does have a peppery zing, it also has notes of citrus & an "earthy" pine aroma.